Quilt tutorials often ends with words like ”bind the quilt” – but how do you do that? Very often you just have to guess or look elsewhere for instructions. After a detailed step-by-step description for the quilt top, you are assumed to know how to finish it. That works well for those of us that are experienced, but those less used to make quilts needs som guidance.

There are many ways to make a binding on a quilt. I decided to share my favourite method and made this tutorial. I advice you to read the tutorial before you start working. Just click on the pics if you want to take a closer look on something.

Your road to success:

Start by cutting the edges clean on you quilt. Measure the circumference, so you can calculate how much fabric you need for the binding. (pic 1) 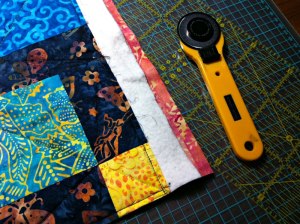 Chose a fabric you like for the binding. Cut 6,5 cm (2,75 inches) wide strips over the width of the fabric until you have enough for the circumference plus a few more cm/inches. I cut my strips straight, but there are people who thinks you should cut the strip on the bias. I think that’s not necessary when the quilt edges are straight. Sew the strips together on the bias until you have one strip that is long enough. (pic 2) 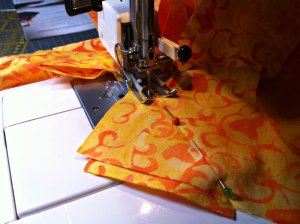 Cut off the seam allowance and press them apart. By sewing the seam on the bias you will have a smooth binding without bulks. (pic 3)

Iron the strip double, lengthwise. Be sure to get the straight side outwards. Be careful to keep the edges align. (pic 4)

Cut the start of the strip on the bias. Fold the edge and press. (I’m going to replace pic 5)

I think it’s nice to make the binding in a contrasting colour. (pic 6) 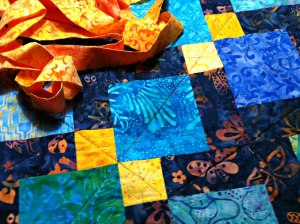 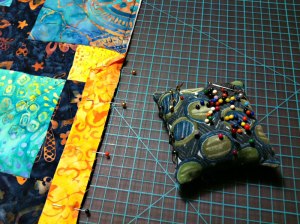 Sew down the strip along the side with a 1 cm seam allowance. Stop the seam approcimatly 1,3 cm before the corner, reverse the seam to fix the thread. You need the little extra space to make a nice corner. Fold the strip around the corner like the picture shows. (pic 8) 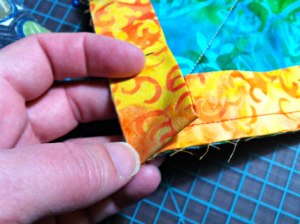 Cut off the tip of the corners. Be careful so you don’t cut any threads by mistake. (pic 11)

Fold the strip towards the back side of the quilt and scrape the seam down using your finger nail. (pic 12) 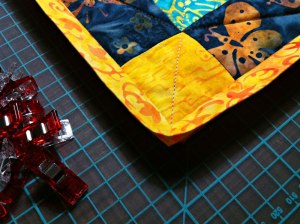 When you fold the double strip around the edge it will end up with the fold just above the seam. This is the moment where I fetch my special quilt clips. There are at least two different kinds of quilt clips.. Use your favourite. If you don’t have any clips you have use needles to pin the strip down. I prefer the clips because it saves my hands from getting scratched while working. Be careful when you fold the corners. Fold them so the seam allowancy ends up the opposite way of the fold when you sewed the strip on. That way the corner will be nice and smooth. (Pic 13)

I usually start by folding one corner an putting the clips around the corner. (pic 14) 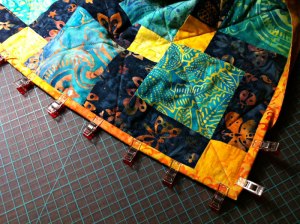 Now it’s time to sew down the folded strip on the back of the quilt by hand. As it’s sewned down already double, will the folded edge align with the seam on the back side of the quilt and the binding will keep the same width all the way around the quilt. That makes it easy to sew a real nice handmade seam. Let the new seam follow the machinemade seam and it will be real steady. Use the blindstitch, for an unvisible seam. Click the picture to have a closer look. (pic 15)

Work your way around the whole quilt. Move the clips as you sew down the strip on the backside of the quilt. (pic 16)

As you reach the beginning of the seam, make a couple of blind stitches at the joint. Then keep going. (pic 17)

Keep on sewing until you have sewn down the strip all the way around the quilt. Fasten the thread. (pic 18)

Don’t forget to mark the quilt with your name. (pic 19)

PS. If there is something you don’t understand after you’ve read this tutorial – please leave a comment.

This site uses Akismet to reduce spam. Learn how your comment data is processed.